Welcoming Eric’s Rocks & Such to Leavenworth, IN!

Those who know Eric Morris are familiar with his many fascinating stories about excavating rocks and minerals all over the world. Perhaps you have even stopped at his festival that has been held in Leavenworth, IN for nearly two decades: Southern Indiana Flintknapping & Primitive Arts Festival.

Eric fell into his passion for rocks as a child, gathering insight and information from local elders who were experts in their craft, leading Eric to start a career at the Marengo Cave and Wyandotte Cave for several years. In his 20s, he would sit outside of Stephenson’s General Store in Leavenworth, IN, and sell rocks to passersby, until he was offered a building to rent, between Stephenson’s General Store and what is now known as Breeden Memorial Library. He took advantage of this opportunity and opened a rock shop, which was open for several years until Eric began traveling to rock shows all over the country.

Eric continues to attend rock shows around the country, but today is proud to be back in his shop between Stephenson’s General Store and Breeden Memorial Library. Upon stopping by the store, you will notice the work that Eric has put into rejuvenating the building that has sat empty for several years. But the real treasure is on the inside of the shop. The store is filled with beautiful gemstones and minerals, hand-carved objects, handmade pottery and jewelry, and more. Each item in Eric’s shop has a story that he is more than happy to share. Make sure to stop by Eric’s Rock Shop and check out all the beautiful items, you are sure to find something you love! 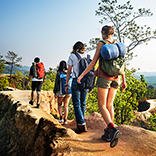 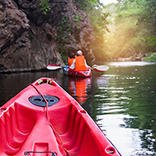 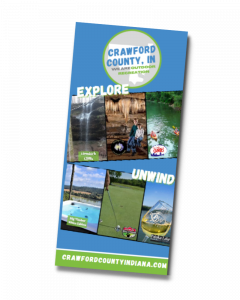 Learn about all that Crawford County has to offer with outdoor recreation, community events, lodging, dining, shopping, and more!

Crawford County is your destination for Outdoor Recreation! Plan a trip and start exploring today!